It is sometime around 4000 BC, and almost all of India is on the verge of war.1 It is a war between two princes but is also the war between right and wrong — dharma and adharma. Pandavas, five righteous brothers led by Yudhistir, ask king Dhritrashtra for their fair share of land. Kauravas, led by prince Duryodhan, were unwilling to share an inch of land.2

Dhritrashtra is lost in love for his hundred sons (Kauravas) and doesn’t bear the courage to not bow to the whims of the eldest one, Duryodhan.

On the first day of the war, before the shankh is cooed to announce the start, Arjuna asks his charioteer Krishna, who is god himself, for a tour of the battlefield. Krishna obliges and takes him to the middle of the field, what the modern world would call no-man’s-land. When Arjuna sees the vast land of Kurukshetra full of warriors prepared to take lives, with his uncles, brothers and friends fighting against him, he is unsettled.

He tells Krishna that this act of attacking his brothers, friends and gurus sounds like adharma in itself. How can I justify killing a million people only for a piece of land? And even if I win, what would I do with this land? I won’t have anyone I love to share it with. Saying this, he gives up his bow and says I can’t fight it. It is not right; it’s not dharma.

He announces he will leave everything — the war, the family, the palace, everything — to live like a sage in the jungle at peace, far away from the war.

Arjuna’s inaction brings the entire war to a grinding halt.

To convince Arjun not to abandon his duty, Krishna begins with the most obvious tactic. He says: stop being a wimp. You are a Kshatriya (warrior), and you are from kuru-kul (the family of greatest kings in all of Bharatwarsha). If you refuse to fight, all you would earn is shame.

He adds: everyone including you, my dear Parth, do not have to worry.3 The body you’re residing in is nothing but a dress for our souls. What do we have to lose but our clothes?

[The true self is invulnerable. Swords don’t cut him, fire doesn’t burn him, the wind doesn’t blow him, water doesn’t wet him, and arrows don’t pierce him.]{.underline}

A true Kshatriya should fight, being unguided by the thought of winning or losing, but because he has to fight. No one should act by keeping their eyes on the fruits of the action.

This last comment sets the stage for the rest of the song of the lord.

Arjuna is confused. Why strive to act at all if not to achieve some purpose? If the fruits of action aren’t relevant to my choice of action, why should I act at all? Why not become a renouncer?4

Krishna puts a succinct reply. You cannot not act. Complete inaction is an impossibility. The forces of nature will ensure you act; it’s not your choice. You will breathe, and you will eat. Even if you make a point not to do either, your inaction will result in action.

He who renounces the fruits of the acts is the true renouncer.

No one who has a body can indeed renounce action. He who renounces the fruits of the acts is the true renouncer. Inaction, too, could lead to fruits—sins of omission.

Consider the millions of soldiers fighting for you. Do you think their wives and mothers will accept your inaction? If your inaction — the choice of not fighting in the war — will result in their deaths, how is that an inaction?

But Arjun remains confused. What should motivate him to do anything if he should not look for the fruits of the action?

Krishna’s answer is philosophically self evident. Think of me. Be truly devoted to me. He is the origin of the universe and the end of it. He is the creator of the world; he is the destroyer of it.

Krishna is the eighth incarnation of Lord Vishnu, and Ramadhari Singh Dinkar best describes him in Rashmirathi.5

How do you devote yourself to me? Yoga.

Krishna explains that there are three types of yoga.6 First is Bhakti-yoga, or the yoga of devotion. You can devote yourself to my worship, praising the Lord, the creator, the destroyer, the nature and the world.

Second is Gyaan-yoga, when you leave everything else and focus on learning yourself. Knowledge of self is the ultimate knowledge. The third is Karma-yoga, when you focus on your actions.

[Every human has three powers: the power to do things (बल), the power to know things (ज्ञान) and the power to believe (विश्वास). Those with a strong desire to do things are Karma-yogi, those with an intense curiosity to know oneself are Gyaan-yogi, and those willing to give up everything for the devotion of god are Bhakti-yogi.]{.underline}

All three routes lead to me. Any other path to me is also one of these three.

I created the world to keep the wheel turning. Whether you like it or not, you have no choice, and the wheel will turn. What are you afraid of?

But, of course, all of this doesn’t quite convince Arjun.

Arjuna, you are going to fight; you might as well accept it and move on.

The Krishna tells him to look around and Arjun notices how everything is paused. Krishna explains that the narrative won’t resume unless you pick your bow and choose to fight. The war, however destructive it may turn out to be and will likely be, is destined to take place, and Arjun is destined to play his role in it.

The events are foreordained and will happen as they should. [From Krishna’s vantage point, the clues to shape the future are already present today. A negligent mind won’t realise it; a yogi won’t miss it.]{.underline} The events will occur as they must occur.

I am death, destroyer of the worlds.7

Arjuna, you are going to fight; you might as well accept it and move on. Your actions don’t need motivation but devotion. You should do it because you have to do it, not because you’re awaiting its result.

प्रकृति (Prakriti, or nature) and पुरुष (Purusha, or observer self) are two dials of the world. The doctrine of non-attached action can be explained by how a tortoise pulls himself within his shell, just like a Karma-yogi pulls one’s पुरुष towards प्रकृति to understand oneself and perform actions by thinking about nature.8

By practising yoga, Arjun, you can learn about yourself — your Purusha. At that stage, your understanding of Purusha will overpower the illusion of Prakriti. You will learn to see things as they are, not as your body wants you to believe.

Since your action’s reactions unfold in this Prakriti, they cannot touch your purusha — your true self. It is untouched, unhindered and unstoppable.

This teaching, Krishna adds, is a Raj-vidya. It is for those who deserve it. Millions of years ago, I narrated this to the sun god; some berries of this tree made their way to Vedas. Now, you must learn, understand and grow.

[So, Arjuna, do the thing because you ought to.]{.underline} 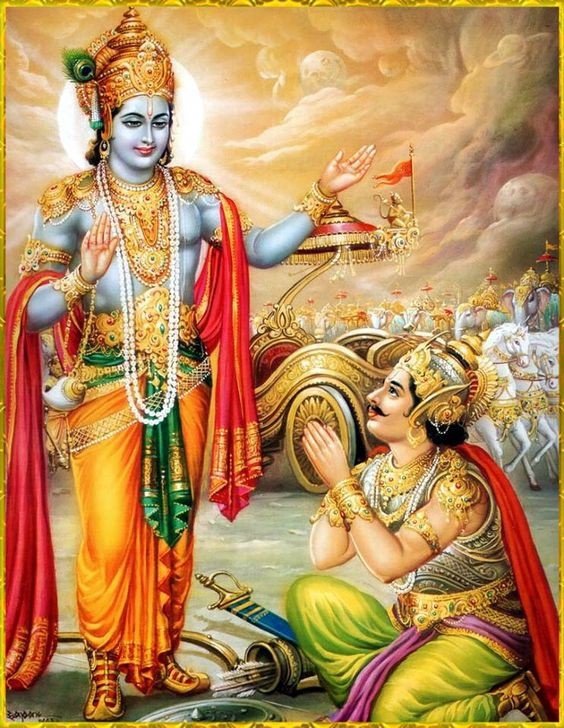 The Question of God

My thoughts on one of the most interesting questions of our lifetime.